Since 1994 the municipality Kranenburg holds an annual memorial service at the monument "Hass tötet, Liebe versöhnt". This Memorial reminds us of the tragic event on Sunday 17 september 1944 when two US aircraft crew members were killed on the street in broad daylight. Many people from Kranenburg witnessed this act of cruelty. Near Kranenburg two American C-47 transport aircraft crashed during Market Garden. The commemoration will be preceded by a Holy Mass in the Peter and Paul Church, Kirchpl. 1 to Kranenburg. Among the many guests are family members of one of the murdered Americans as well as the co-pilot of the other plane who Missing in Acttion since 17 September 1944. 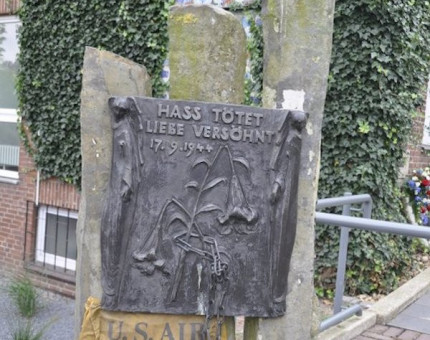